Compassion is an interactive narrative experiment about dealing with getting help when you’re in pain, which is sometimes harder than dealing with the pain itself.

It is also an experiment for me to learn how to use Construct2 with something with as little scope as possible!

the sparrow was in pain, it couldn't have flied away. it was vulnerable, leaving it to die and be hunted would be a much more cruel fate for it to have. me being there, covering it with flowers was a more dignified way to end it's suffering. that was my compassion, a respected and dignified death. Fly higher sparrow 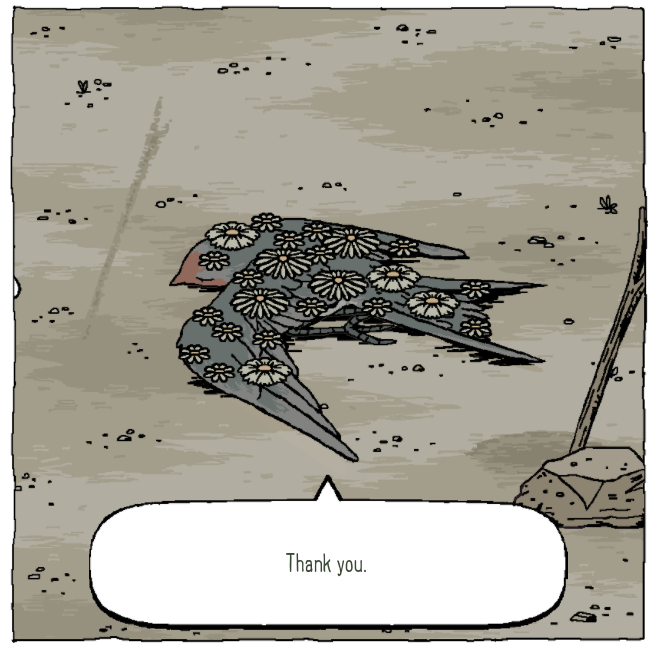 i couldn't bring myself to do it...

Wow, I don't know what to feel or think or say. There are others more articulate than I am, more intelligent or more moral and would know what the real answer should have been. All I could do was cover its smushed little face with flowers. :( 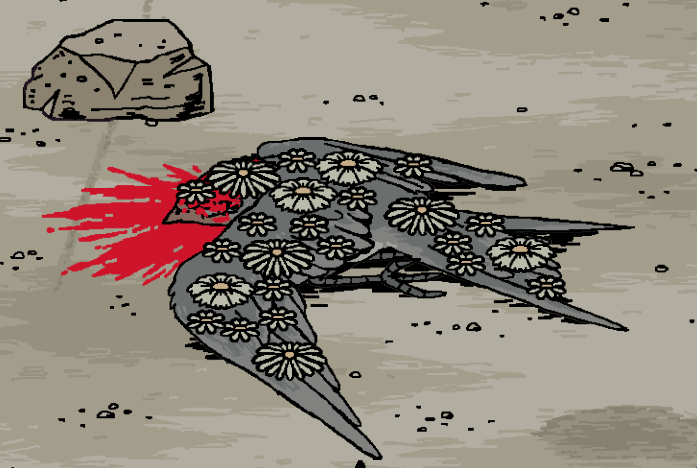 this game teached me something.

That was… Very inspiring and very sad. Thank you.

Short and evocative, not to mention the beautiful art and subtle sound design (or were those tweets my imagination...?)

Rest in peace little swallow, I sure hope having your head crushed with a rock was how you wanted to go.

Does anything look more dead than a dead bird?

Don't know if I'd have it in me to truly do this, but I'd like to think I could do the right thing.

This game is very sad.. The only thing I could do is put it out of its misery.. I covered its head in flowers.. It's a game that makes you think. <:')

This was such a lovely short game, thank you for the experience. I didn't have it in me to use the stick or rock, so I'm leaving this game after adorning the bird in flowers. I'm not sure what the compassionate choice here truly is, to leave the bird or to help it pass. My decision here may be more self serving, to let the bird's suffering be prolonged, and I like that such a short game is making me question what's compassion vs my own personal comfort.

i was BAWLING over this game. i tried to find a different solution, there was none, until i noticed that the stick can be right clicked with.
you can poke the bird.
for some reason ,this made me even more distraught, since it gave you the same comments about compassion, even though you made it suffer even more, essentially :(
love the game and its symbolicity, however i will cry over over this for a few days thank you

There have been a lot of games that were difficult for me to complete. Maybe I didn't want it to be over, or there were hard puzzles.

The moment I opened the game and saw the stone, I knew exactly how to end this game, the way it finished. It was a brutal reality.

I ran through the dialogue many times, praying for an alternate solution. I didn't even want to know what function the stick might serve.

This was, for lack of another term, beautiful in a hard to describe and sorrowful sense. 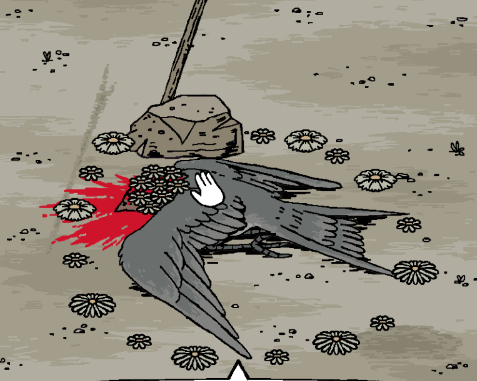 One of the most heart-wrenching short games I've ever played. Thank you for writing out so succinctly why compassion is important to both the person giving and receiving it, and why resisting compassion isn't a sign of strength.

"Compassion is a brave choice," will always make me tear up every time I think about it and this game.

why didnt you add a choice to pick up the bird and help it :(

here I wish I could help u bird :( 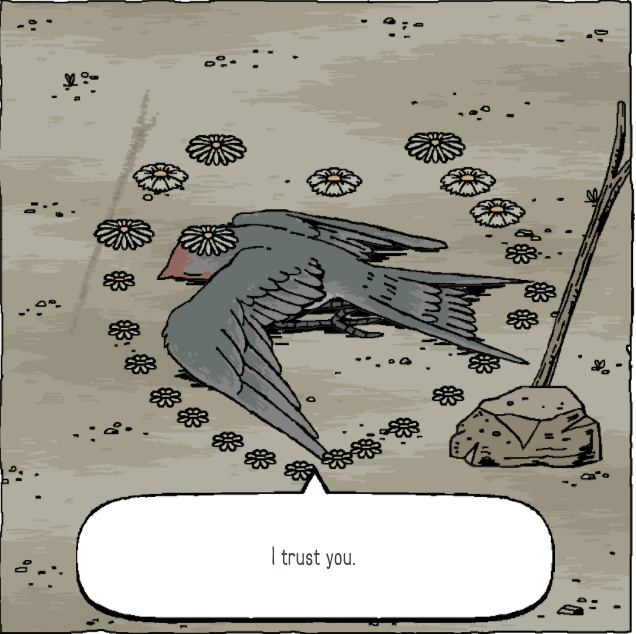 A short, sad game. It tells a story in one of the most original ways I've ever seen. Beautiful

this is the hardest i've cried in a long time. i really didn't want to kill the bird and it took me so long it actually do it. i put all the flowers on them first and covered their face because i couldn't look at them when i dropped the rock. i am autistic and have a lot of empathy towards animals, including fictional ones. this was very hard and very beautiful. it felt like i was killing a part of myself.

I didn't think of the game as implying anything about what you should do if you see an actual bird in this situation. It's art, and art doesn't have to be literal. Personally, I saw the bird as embodying vulnerability -- the player's or someone else's -- and the choices we make when we encounter that vulnerability.

I didn't kill the bird. I covered it in flowers and closed the game. I just didn't have the heart to! The animation and art are so good and deeply affecting, so it's hard to see it as just a choice in a game, even when it's the choice you want to make.

I really loved this. It's a short experience but hit harder than anything I've played recently. Great job!

I collected all the flowers before closing the game because I did not want to kill or make the bird suffer more. It was heartbreaking, but a very good short game.

This is a really wonderful and thought provoking game. Hands down one of the most powerful short games I've played.

cw// personal stuff:
i just had surgery after being in horrible chronic pain for 3 months (and of and on pain for years) and this is what ive needed. unfortunately ive felt very alone through out all of this so this game was sorta like the hug i needed. thank you 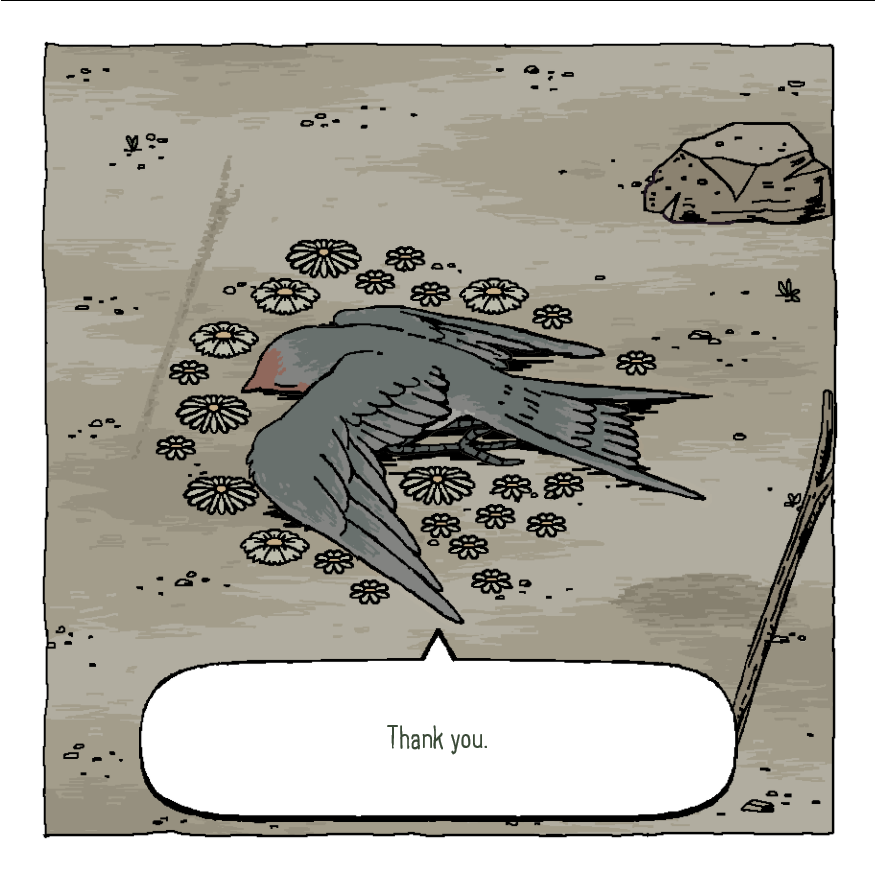 Thank you for playing it, i'm super happy to hear that it made you feel that way.  Wish you the best for post-surgery! 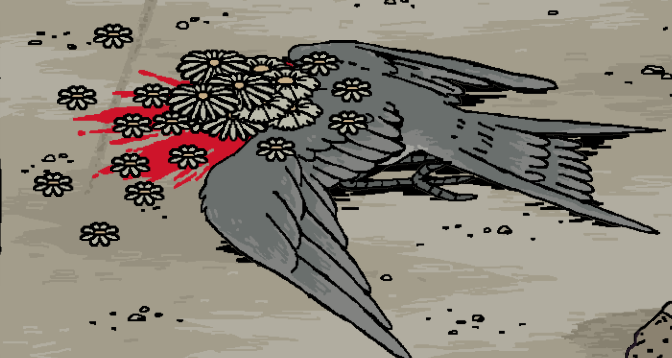 It's so sad seeing someone suffering from pain.

I wish I could help that little bird :(

It worrys me that my first thought was to go for the rock.....

what do i do with the stick--

Me and my friend played this together and cried, it's very sad but also strangely beautiful at the same time.

This hit way too close to home omg

i wish i could take this bird to a vet or something, just make it  feel better

i killed the bird in the end, but not before covering it in flowers.

Man, this hurted me inside. I thought that i needed to kill the bird. I am looking forward to make games with simple gameplay and narrative, but with great impacts.

Sometimes i feel anxious and empty about making my own games when i see the amount of games that already exist, like a single water drop in the ocean that soon will be forgotten. But, when i play these small games like yours, i remember that my games don't need to be "famous" to be memorable.

Sorry for my english, i still need to practice. 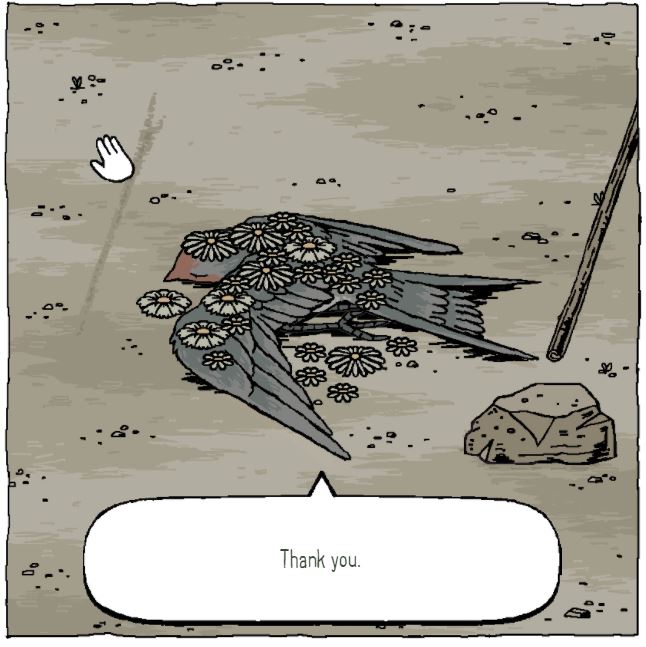 This game kind of makes me uncomfortable because it hits too close to home.I dont know how to be vulnerable with people. And even if i try, all my relashionships end up being superficial even if i open up, am i the shalow one then? I wish i could be vulnerable, i wish i tolerated compassion from others and i wish i didint associated being in pain with being weack.

I've been struggling with the same feelings since always too. I'd like to say that it gets easier as you keep trying, but it feels extremely painful every time still, getting older and more patient doesn't make it any less hard and fucked to be vulnerable- But I do feel like it's worth it to keep trying to understand the puzzle that being compassionate with your own self is, since the pain goes away the next day or week or month and what's left is a step forward.

Thank you so much for your comment, keep going!

Closed without killing the bird. I feel like compassion was just keeping it company for a while and feeling for it. Seeing some comments here about how it's wrong to put the player in the position where the only  option is violence but I think it's important to remember (in the world of video games where violence is often the main tool we're given to interact with the world given to us) that there's always another option - no one can force you to do anything. (Of course you're not going to spend $60 on a AAA title like GTA only to turn it off when you're given a gun, but this is different.) Though  I was honestly tempted to kill the bird because I often play out games to see multiple endings,  I couldn't do it. I wonder if I made the right choice?

Reminds me of a baby squirrel my boyfriend and I tried to save. I cried a lot when it died, it was so small and fragile. I hope that we were able to comfort it in its last moments - we only had it for an hour or two. That might be anthropomorphizing a bit, but we found it on the sidewalk and brought it inside and kept it warm in a washcloth. The thing is, most people would probably not have tried to help, and I understand - it hurts a lot to get invested even a little. It's easier to look away.

If this were real life I might have tried to take the bird home in a shoebox. But that wasn't an option, so I closed the game when I was done clicking the flowers. I understand that you're put in a position where you want to do *something* for the bird, but if you don't like the options given to you, you don't have to take them.

oh god what did i do to the poor bird. i wish there was a another way

Really beautiful illustrations. I get the metaphor but that's still pretty hard to look at and do in this game.

To all of you who read my comment: stay informed about associations, shelters or structures that are close to your home and know how to deal with an injured animal (and try to heal). Sometimes an association exists in your town or the next town and you don't know it. Concerning birds, if you see one on the ground and wounded, put a piece of tissue in a cardboard box, put the bird in it, and try to give it a few water drops by letting it drop in the corner of its beak (if you see its throat swallowing the water, that's a good sign, continue very slowly; otherwise stop so as not to drown it or hurt more!) then bring the bird to a care associations/"bird care and protection". That's a great thing to do when this kind of association/shelter exists near your place 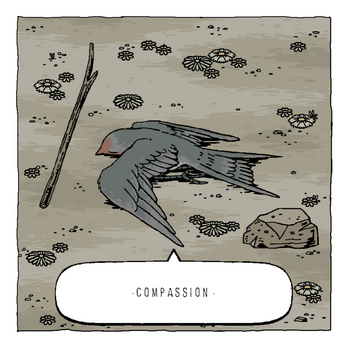