the story gives a soft and fluffy feels... I like it :D

I get the message, and it's a very heartwarming one at that. And, for an HTML5 visual novel it shows a fair amount of care into creating that mesage with graphics. But I do have to note, it does have an amount of stiltedness in the dialouge. I can deal with this, but it could use some work. You see, when you're trying to do anything with as story, you need to understand Immersion. Any story, big or small, needs to seem real, or at the very least, stay within its own bounds. It needs to stick to its own rules, or the immersion can break. This means the thing you were trying to create/cause, whether a lesson learned or an emotional resopnse, can, at the very least, be a little scuffed from execution. The way characters present their struggles in a very disconnected way from how they look and norrmally act makes the immersion break and the moral a little harder to swallow. I get that this is a short tale, but look at your other game, Compassion. You're able to make a dying bird teach me a moral with it's pain in less than a minute. The thought that went into that is awe-inspiring. And it sticks, because it stands by it's own rules. The bird doesn't randomly chirp in it's sentences, does it? It's keeps its atmosphere of sending a message, and does it well.

TL;DR: The immersion of the story is broken by the dialouge's uncomfortable stating of people mental setbacks. Pretty good for people who arent receptive of that though, and you've shown you can keep an atmosphere with your game Compassion.

I agree, it's not exactly a subtle way of presenting each character's struggles and if I was rewriting it I'd definitely try to be subtler. My intent with Weightlifter was that it read as an interactive children's book, so I guess it doesn't bug me too much that it's quite on the nose.
Thank you so much for your comment, glad to hear you liked Compassion!❤︎

ahh this made me cry happy tears, thank you for your effort. your point on resilience is a good one and I want to be more resilient now

I came in expecting one type of game and got something very different. The visuals and the requests - this was a game that had a lot of forethought put into its construction. I only wish that one of the characters had gone to a specialist and come back realizing that's what they needed to do (because sometimes that's what happens). Great work, Ivan!

UGHAH! Right in the feels!

This was really nice! 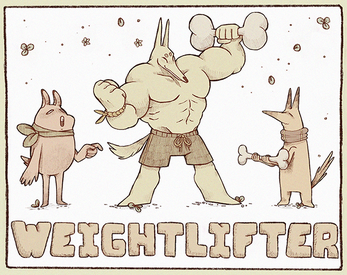